Home / Indian Railways / Others / Bike Transport by Train – How to Parcel, Charges, Process

Bike transport by train or any two-wheelers is One of the most common things. Indian Railways is not the biggest Rail Network but also is one of the biggest modes of transportation.

How to transport bike in train? What are the procedures to book the bike parcel on the train? How much should I pay for Bike parcel charges in Indian Railways? Is it possible to proceed with bike transport by train as luggage?

You can find all answers to send the bike by train below:

Bike Transport by Train How to Transport Bike in Train?

Bike Transport by Train – As a Luggage

On the day of bike transport, please ensure the following:

Bike Transport by Train – As a Parcel

Bike parcel in train is almost similar to sending a parcel through a 3rd party courier such as Packers and Movers, Gati etc.

Documents Required for Transportation of Bike by Train –

Before booking for transporting your bike, make sure you have all below documents of the bike:

Without insurance and bike registration certificate, it is not possible to transport a bike by train.

You should also duly fill the form for transporting a bike, which requires providing your details, source and destination address, contact number, etc.

Rail transport Fees is always cheap when compared to another mode of transportation. Please find the for bike parcel charges/cost

The railway bike parcel charges generally vary based on the weight of the bike and the distance. The distance slabs are in kilometers. For example,

Other Points to Consider During Bike Transport by Train

Declaration of the value of the bike is an important factor. All transportation made through Indian Railways is covered by insurance.

The bike transport by train cost in Indian Railways includes a nominal fee charged towards insurance. You should declare the value of the bike.

Make sure to empty the petrol tank of your bike when you transport the bike in case of long-distance transportation like Central Railways or Western Railways from Southern Railways or vice versa, you should empty the bike.

In the case of any damages or losses or suffers an accident, Indian Railways pays the value of the bike declared. 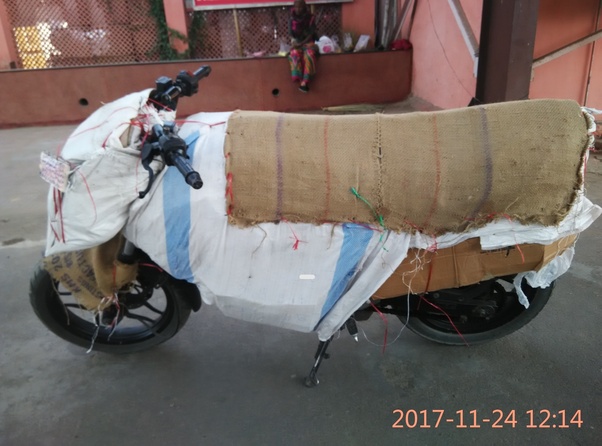 What happens if you send a bike by train with petrol?

Firstly, you will have to pay a fine of Rs. 1000/- at the destination place. This fee will go to the Railway’s account.

Secondly, you can not take your bike at the destination place even after paying 1000/- fine. Yes as mentioned in railway rules they will rush the bike to a police station and you will have to answer the police that Why you have filled the petrol? Then they will force you to submit your Identity into police station thereafter you can take your bike back.

I understand that the Little bit of petrol in a bike is important to reach up to the petrol pump at the destination. As everybody knows the above-mentioned things are just formal rules which nobody follows because of Corruption. If you give only 50Rs. to the guy who takes your bike up to the train then he will allow you to keep a little bit of petrol.

My Experience in few words – How to Send Bike by train?

1. Go to the railway’s station at parcel counter and ask any local guy to parcel the bike, do not ask any authorized railway officer because the local guy is used to do this and he knows the process very well.

2. Let the guy pack your bike properly and meanwhile you take the receipt ready at the counter. Once you get the receipt you can not touch the bike until it reaches the destination. Because railways have taken ownership of your bike now after giving the Bilti (Receipt) to you. 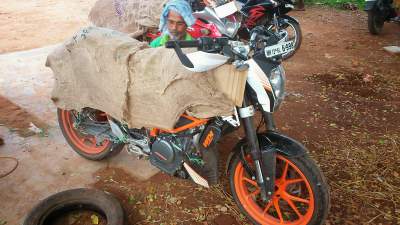 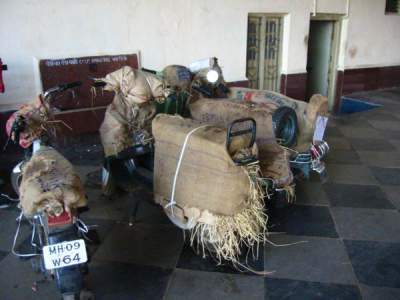 In this case what to do? I’ll suggest you give Rs. 200/- to the guy who has packed your bike and tell him to send a bike by train today only. You might be thinking why Railway will allow that guy to touch your bike after taking ownership? Actually, it’s against the rule but all people are corrupted in railways.

The money which you will give to the guy (Rs. 200/-) gets distributed among all the people involved in this process. 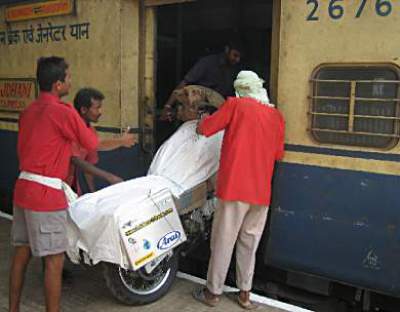 I followed the same process mentioned above and my bike reached to the destination place on same day. If you don’t follow my experience then i am 100% sure you can not send bike on the same day.

Thanks for reading about my experience! If you have any doubts or complaints then please ask in the comment section below.

What is Premium Tatkal?

78 thoughts on “Bike Transport by Train – How to Parcel, Charges, Process”