What is the train schedule in Indian Railways?

Train schedule is nothing but a chart that lists out the details of the halts and timings between the source and destination station of a particular train. For instance, if a train starts from Chennai Central and runs up to Mumbai Central, Chennai Central are the source station and Mumbai Central is the destination. The stations where the train halts in between the source and destination stations are listed. In addition, with time of arrival and time of departure, along with the duration of halt in each station is provided. It enables the travelers to find the scheduled arrival and departure in each station.

Train Schedule in Indian Railways can be checked through below link:

Why should you check the train schedule in Indian Railways?

Not all travelers will start their train journey from the source station and travel up to the final destination of the respective train. The journey may begin at any intermediate station and ends so. It is called pooled quota reservation. So, it is obligatory to check train schedule whether the train runs through the particular route.

A few trains running from and to popular / major hubs of India may have a different route. Also, a few trains sharing the same source and destination including the same route may have less or more intermediate halts, which increases or decrease the duration of travel. It also makes a lot of difference in the cost of the ticket.

What can you get from the train schedule in Indian railways?

How to check IRCTC Train Schedule –

When booking the ticket online, do check train schedule just like you check for the availability of the charts.

Train schedule in India is not available for all trains

Train schedule in Indian Railways official site is available only for the trains that come under PRS system. PRS refer to Passenger Reservation System. The trains that have reservation quotas can be checked for the schedules.

For looking at the train schedules that don’t come under the reserved system can be viewed from other sites offering information about the passenger trains and local trains running between suburbs.

The IT department of the Indian Railways, CRIS, Centre for Railway Information System has launched this application featuring various railway inquiries. 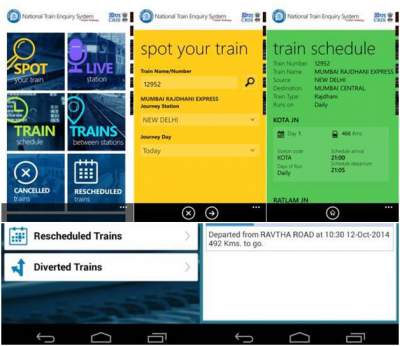 Now you can check the IRCTC train schedule on the go. Many times, the travelers are not aware about the delayed arrival or departure of the train. NTES App eliminates this concern. Indian Railways has launched the NTES app to check the train schedule, track the trains and real time status of the running trains.

You don’t need to wait for a long time or for hours for the arrival or departure of the train when you the information about arrival / departure in time. You can get the real schedule of running trains, the real time information.

SPOT YOUR TRAIN is the major feature of the NTES App. The feature provides accurate information about the current location of the train, running status, expected time or arrival, etc. Just like the complete train schedule you get in the official site, you can the train schedule live with all details. 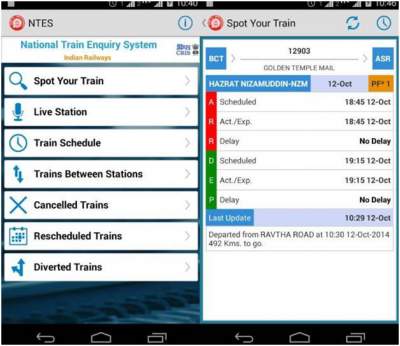 Another informational option designed in this app is ‘Cancelled Trains’ feature. A few trains may get cancelled or may have diverted routes. Partial route cancellations, cancellation of trains through the full route, train schedule live and diverted route are displayed.

The app was initially designed for the windows 8 mobile runs on the Microsoft platform. The ease of getting information about train schedule live made this app available on all mobile platforms!

Checking the train schedule is quite important in the locations where the trains run occasionally. Long distance travel, say train run for more than 2 days from one part of the country to other part, you need the handy information about the train schedule live!

10. Punjab Mail – The train runs from Mumbai Central to Firozpur Cantonment with 54 halts, running for around 35 hours.

9. Amristar-Dadar Mail – The train runs from Amristar to Dadar covering more than 2000 kms running for around 2 days, just 43 hours with 88 halts.

8. Garib Rath – It is a Delhi express running from the Delhi Anand Vihar Terminal to Bhaghalpur covering a distance of 1209 kms. The duration of the journey is around 19 hours.

7. Garib Rath – The train from Bhaghalpur to Delhi Anand Vihar Terminal grabs the 7th place in the list of top 10 most searched train schedule.

5. Utkal Express – Another train running to Puri from Haridwar. The duration of the journey is more than 2 days and the train halts at 70 stations.

4. Mangala Lakshadweep Express train – One of the longest trains running daily with appropriate journey time of 50 hours! It runs from Ernakulam in Cochin to Delhi Nizammudin.

3. Punjab Mail – The train ranked 10 in the list grabbed the rank three, but the travel route is upturned!

2. Magadh Express – It runs from New Delhi to Islampur, Bihar and runs for around 20 hours.

1. The first place goes to, MAGADH EXPRESS!!! The same train from Bihar, Islampur to New Delhi! Trains in Bihar are quite rare and it is no surprise that the train grabs the first place, in the list of top 10 most searched train schedule!

What is Premium Tatkal in IRCTC ?